When you visit our website, we collect your zip code or IP address to tailor your experience to your AAA club. We also collect information about how you use our site to analyze our traffic and improve our services. For more information about our privacy practices, please see our Privacy Policy. 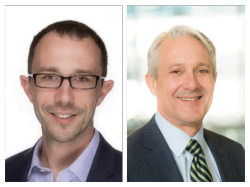 “By moving our product leaders to the executive leadership team, we increase the focus on existing and new products, both of which are critical to driving growth and delivering what customers want from their insurance experience,” said Troy. “Both roles are critical to growing our presence with even more competitive products that meet customers’ needs.”

Ryan Vigus leadsCSAA Insurance Group’s auto and home personal lines. His team develops and manages insurance products that serve the needs of AAA Members. He began his career in actuarial and led the auto pricing team before transitioning to state product management. He is a Fellow of the Casualty Actuarial Society and has a master’s degree in applied mathematics from Bowling Green State University (Ohio) and a bachelor’s degree from Azusa Pacific University (Southern California).

Eric Ummel joined the company earlier this year to lead the development of commercial insurance products and solutions. He has more than 25 years of experience in commercial insurance in a variety of roles, including claims, underwriting, operations, product management and distribution. Before joining CSAA Insurance Group, he served as general manager of the Northwest Region of Safeco Insurance, where he led the region to exceed annual growth plans. He has a bachelor’s degree from Western Washington University.

CSAA Insurance Group, a AAA Insurer, offers automobile, homeowners and other personal lines of insurance to AAA Members through AAA clubs in 23 states and the District of Columbia. Founded in 1914, the company has been rated “A” or better by A.M. Best for more than 90 years, and is one of the top personal lines property casualty insurance groups in the United States, according to the National Association of Insurance Commissioners. The company has been repeatedly named one of the 50 most community-minded companies in America by Points of Light. More information is available at http://csaa-insurance.aaa.comand on social media (Facebook, Twitter, LinkedIn).